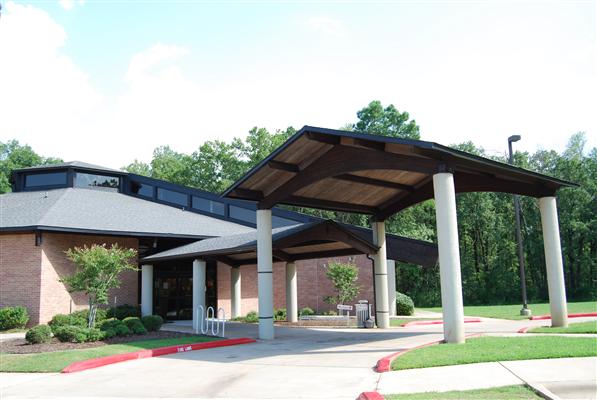 In 1969, Library Board President Robert H. Nelson Jr. appointed a committee to study the community and identify a site for a new branch library in northwest Shreveport, known at the time as the Cooper Road area.
The namesake of the branch, David Herndon Raines, was a successful businessman working in agriculture and oil, as well as a philanthropist and community leader during the early 20th century. Among his many contributions to the community, Raines oversaw the construction of the first African American church in the Herndon community, provided funding to maintain a facility for African American senior citizens in Dexter, Arkansas, and offered financial support of Wiley College, a historically black university in Marshall, Texas. Concerned particularly with the label of “juvenile delinquent” associated with young males, Raines donated 22 acres of land to support facilities to protect these children from adult offenders while empowering them to become better citizens. The center was in operation until it was replaced with the Caddo Parish Detention home.

In 1963, a portion of the land used for Raines’ earlier endeavor was leased to the David Raines Association for construction of a recreation center. The David Raines Community Center was built on a three-acre lot, with funding provided by the police jury, a Housing and Urban Development grant, and the library, which paid $35,000 of the library’s 1968 bond issue to  the parish for the share of the building occupied by the library branch. The portion of the building housing the library branch was 2,824 square feet in size and opened on December 3, 1972.

A new David Raines Branch was constructed with funds from the 1996 capital tax issue. Currently, the branch is 8,500 square feet and was designed by Lauren Marchive of the Newman Marchive Partnership. The library features a dramatic tent-like roof structure with exposed natural wood on the interior. The new building opened in July 2003, with a total building cost of $1,908,385.