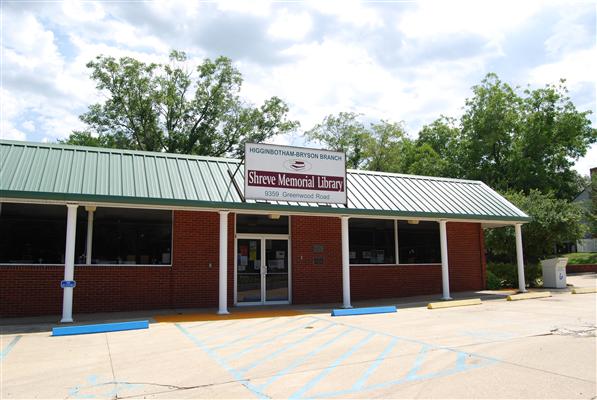 This branch originally opened July 18, 1930, as the Greenwood Branch Library. It was one of the first five part-time branches founded under a partnership between Shreve Memorial Library and the Caddo Parish Police Jury. The branch was originally housed in a back room of a store building. Mrs. E. W. Bryson was the first librarian and Mrs. Margaret Higginbotham assisted with the organization of the branch and was later the librarian. Mrs. Bryson remembered that during the Depression the branch not only provided books but was the site of many programs that benefited the community, including sessions when the Cooperative Extension Department brought in canning equipment for local residents to can their produce and meat. In May 1939, the library moved into larger quarters at the front of the same building. By August 1942 it had moved to the cafeteria of the local school. In September 1949, the branch was remodeled and enlarged to twice its original size; it was still located in the school grounds. The remodeling was done “with the cooperation of Mr. Hawkins, principal of Greenwood High School, and the Greenwood community,” according to a library newsletter.

Later the branch was moved to a room in the Greenwood Town Hall on Highway 80. In October 1975, the Library Board allocated $1,000 for the renovation and repair of the branch. This library area was 350 square feet in size.

In 1987, the Town of Greenwood constructed a new municipal and community center complex.  A new room of this building was designed for the Higginbotham Library Branch. This branch was 624 square feet in size. In 1999 the branch was re-named the Higginbotham-Bryson Branch in honor of Mrs. Bryson’s long service as librarian.

The library’s 1996 capital tax issue offered the municipalities with a part-time library branch a chance to apply for a grant to remodel, add onto, or replace their existing branch facility. The municipality would retain ownership and maintenance responsibilities for the building.  Greenwood Mayor Jerry Melot applied for the grant amount designated for towns above 800 in population, which was $109,000. The town received a grant from the library of $10,000 for furniture, fixtures, and equipment, making the total amount granted by the Library $119,000.   The Town of Greenwood purchased a building that was former convenience store at 9359 Greenwood Road in Greenwood. This building was completely renovated to hold a Community Center on one end and the branch library on the other. The new library facility is 1,528  square feet in size. It opened in mid-October 2002. Cathy Key succeeded Claire Loveridge as the librarian. The branch is currently open 22 hours per week.