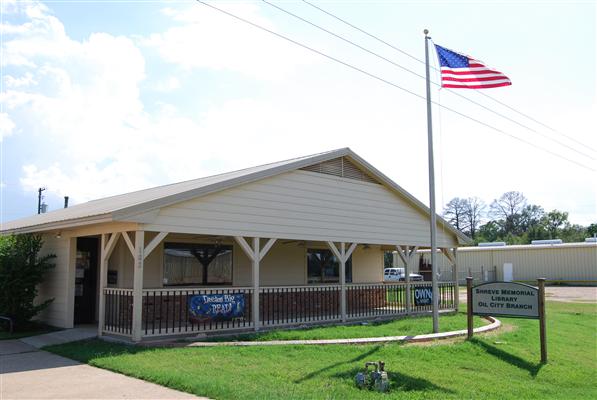 The Oil City Branch was the ninth part-time rural branch to be established by Shreve Memorial Library. It opened on March 14, 1932. Its first librarian was Miss Anna Belle Ferguson. In November 1932 the local parent-teacher association put a gas meter in the branch and began paying for the gas used by the library. In the summer of 1944 the branch moved into new quarters in a building leased by the town for a town hall and library. Mrs. Corinne Haygood was the librarian at that time. Later, Mrs. Helen Wilson became the librarian.
The branch remained in the town hall until 1983. In February or March of that year, the town council voted to move the library out of the town hall because the space was needed for storage of municipal records. The council proposed to move the branch to a building across the street from the town hall. The new building was owned by Mr. Dub Allen and was leased by Oil City. The library was 565 square feet in size. In April 1983, the town council voted to match Shreve Memorial Library funding of $2,000 for the purchase of adjustable metal shelving for the branch. The library repainted the interior, replaced the flooring, and provided some new furniture and books. Mr. Dub Allen contributed a heater/air conditioner unit to replace the old gas heater, and also built a new concrete walk to the door. The branch had its formal opening on August 14, 1983.

The library’s 1996 capital tax issue offered the municipalities with a part-time library branch a chance to apply for a grant to remodel, add onto, or replace their existing branch facility.  The municipality would retain ownership and maintenance responsibilities for the building. Oil City Mayor Todd Hopkins applied for the grant amount designated for towns above 800 in population, which was $109,000. The town received a grant from the library of $10,000 for furniture, fixtures, and equipment, making the total amount granted by the Library $119,000.  The town purchased a building at 102 Allen Street that had previously been a Willis-Knighton Healthcare clinic and renovated it as the new library branch. The building is 1,600 square feet in size. It opened to the public on June 2, 1998. In 2008 Mayor J. C. “Chip” Dickey requested and was awarded a grant of $8,000 from the Library Board to assist in a renovation, including a new roof, general repairs, and the addition of a porch to the front of the building.

Mrs. Helen D. Wilson was a longtime librarian of the Oil City Branch. She was succeeded as librarian by Ms. Vicki Poe. The current branch manager is Sherri Baca, and her assistant is Karla Bankard.