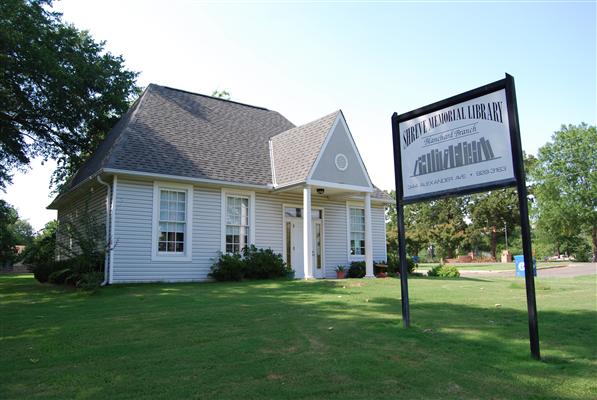 The Blanchard Branch was established in 1933 as the tenth part-time branch of Shreve Memorial Library. It was a cooperative endeavor between Shreve Memorial Library and the Town of Blanchard, the library providing the librarian and books and the town providing the building, maintenance, and utilities. The library was housed in a log building that also served as the Town Hall. The first librarian was Miss Rosa V. Cole.
In 1949 a new wood-frame building was constructed for the library on the grounds of Blanchard School. It was built partially from materials salvaged from the old wooden school building, which was demolished at that time. The cost of the new branch building was $844.41, of which $400 was paid by the police jury and the rest donated by local citizens. The new building formally opened on November 15, 1949. Mrs. Waylon Morgan was the librarian at that time.  Miss Mattie Lou Ashby became the librarian in 1958. She was succeeded by Mrs. Frances Andrews.

In 1976, the branch was scheduled to be closed due to lack of running water and toilet facilities. Caddo Parish Health Unit officials required that the branch either receive these improvements or close. Federal EPA regulations also required that every building in the town had to be tied in to the new Blanchard sewage system. The Blanchard Town Council did not provide these systems by the deadline for tying on to the sewage system. In early December 1976, a library board member inspected the branches at Blanchard and Bethany and reported that it would not be feasible for the library to remodel either building. The board decided to close both branches on December 31, 1976 and substitute bookmobile stops.

Several days after the announcement of the Blanchard Branch’s closure, local residents formed a Library Renovation Panel to consider remodeling the building. Another alternative considered was moving the branch to the nearby Kiwanis Club hut. The group chose renovation and conducted a fundraising drive. The Library Board contributed $2,250 remaining from the 1968 Caddo Parish bond issue for library construction. The rest of the funding was donated by local businesses, clubs, and citizens.

The renovated branch was dedicated on May 14, 1977. The renovation included an extension to house a restroom, closet space, and a small children’s area. Central heating and air conditioning systems, a new roof, interior and exterior repainting, and electrical system rewiring were also added at this time. This building in its expanded state was 569 square feet in size.

The library’s 1996 capital tax issue offered the municipalities with a part-time library branch a chance to apply for a grant to improve or replace their existing branch facility. The municipality would retain ownership and maintenance responsibilities for the building. Blanchard Mayor Larry Permenter applied for the grant amount designated for towns above 800 in population, which was $109,000. The town later received a grant from the library of $10,000 for furniture, fixtures, and equipment, making the total amount granted by the Library $119,000. The town purchased a lot at 344 Alexander Street in Blanchard and constructed a new building of 1,008 square feet for the branch. The architect for the building was William L. Gary. The construction contractor was Integrity Construction. The grand opening ceremony was held on December 19, 1999. Mrs. Grace Harr is now the librarian and starting in 2008 the library became a two-person branch. It is currently open 29 hours per week.