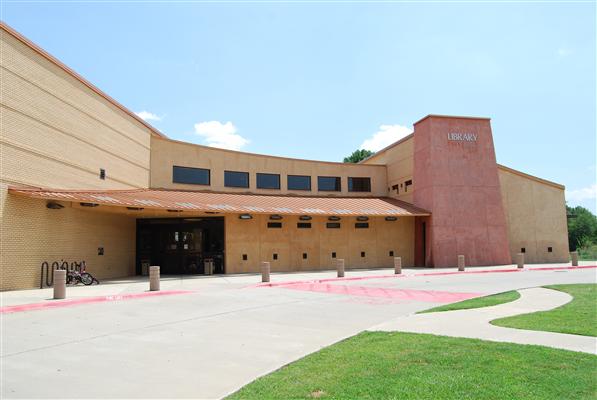 This branch was constructed as the Union Avenue Branch, located at 5802 Union Avenue. The building opened on February 21, 1965 on land leased from the Caddo Parish School Board.  Supposedly Mayor Clyde Fant himself determined the location of the branch, a problematic one since it was only 1.8 miles from the Cedar Grove Branch and less than a mile from the Hamilton Branch. By 1968 the branch’s circulation had become very low, partly because it was so close to two other branches. On January 13, 1978 the building was closed as a public branch, and it became the home of the Extension Services department, the book-routing operation for the part-time branches, and the bookmobile operation. The building was 3,693 square feet in size.
In the summer of 1983, Commissioner Hersey Wilson began discussing with the Library Board the possibility of reopening the branch to the public. An official request to reopen the branch to the public was made by Commissioner Pennywell on October 11, 1984. Public interest was demonstrated by a petition signed by 252 citizens and a public meeting attended by 40-50 people. Citizens at the meeting stated the need for the branch due to the large number of school-age children in the area. The Library Board agreed to open the branch to the public on a part-time afternoon basis (20 hours per week) in June 1985, while maintaining the routing, bookmobile, and Extension office functions of the building during the morning hours. The branch was renamed the Bookmobile Center to emphasize its dual function. At that time the library operated two bookmobiles, which continued to operate from this building. Later the hours of this branch were expanded to make it a full-time branch, open all day Monday through Friday and also on Saturday and Monday through Wednesday evenings.

Funded by the 1996 capital tax issue, the new branch was named the Hollywood/Union Avenue Branch in recognition of its location at the corner of Hollywood and Union Avenues. The new building was built on the site of the old one, which was demolished. A new address of 2105 Hollywood Avenue was assigned to the site. The land, which belonged to the Caddo Parish School Board, was officially leased to the library. The grand opening ceremony was held on September 16, 2006. The new building was designed by Mischa Farrell, Architect, and is 8,500 square feet in size. The plan had been to move the bookmobile operation to the Atkins Branch but that was opposed by the Atkins community so the bookmobile operation remained at Hollywood/Union Avenue Branch. The cost of the building was $2,287,371. The most striking feature of the branch is the set of large internal windows behind the service desk depicting portraits of citizens of the community. Artists for the project were Neil Johnson, who photographed living citizens nominated in community meetings, and Walter Washington, who made drawings of deceased citizens who were nominated by the community. The artists were selected through a competition coordinated by the Shreveport Regional Arts Council.