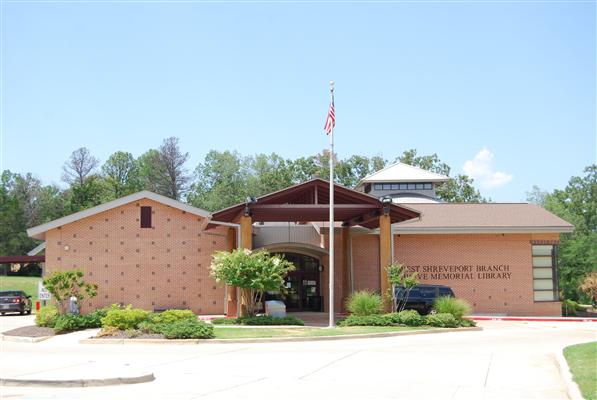 In 1988, a library capital tax proposal was intended to provide for the construction of a West Shreveport Branch, bringing library services to a traditionally underserved community, with an additional proposal to support personnel costs associated with the new branch. While the support proposal passed, the capital tax failed, resulting in the Library Board of Control authorizing the establishment of a leased branch to serve this rapidly growing area.
In May 1989, a 3,600 square foot commercial space was leased in the Huntington Park Shopping Center at 5723 Pines Road, Suite 110. The space had formerly been a retail bicycle shop. Renovations included the construction of partitions to create an enclosed office/staff lounge space and a meeting room at the back of the facility, new carpeting and paint, and improvements to make restrooms handicap accessible. Much of the library furniture and shelving was purchased secondhand from St. Vincent’s Academy, which had recently closed. The branch opened with a collection of about 10,000 books, which included a combination of new purchases, purchases from the St. Vincent’s library, and books pulled from other branches. As expected, the branch was extremely popular and demonstrated high circulation numbers.

The 1996 capital tax provided a new opportunity for funding, resulting in the construction of the current West Shreveport Branch at 4380 Pines Road. Designed by Richard Kravet and Cynthia Dubberly of Billes Manning Architects LLC, the branch boasts 14,120 square feet at a cost of $2,717,509. It includes a technology center, a meeting room, and two study rooms, as well as a treehouse-themed children’s area, a separate teen area, and a reading area.